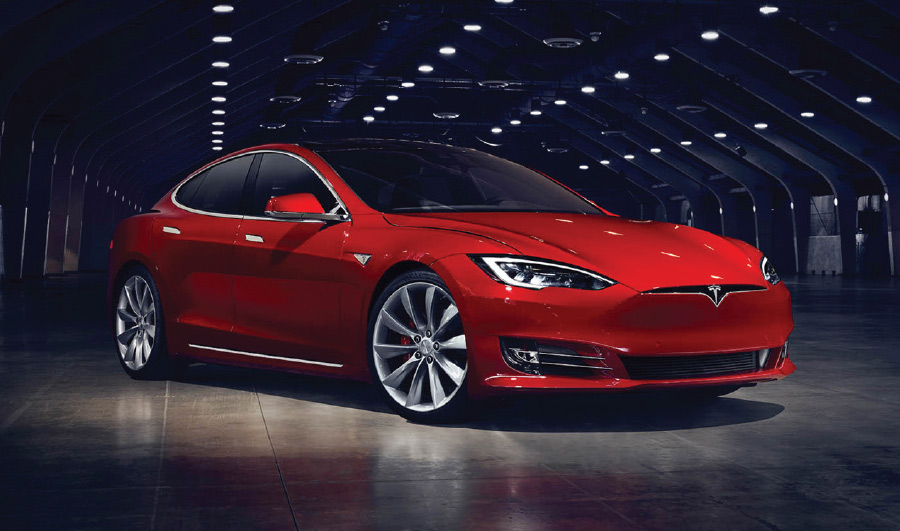 Elon Musk had phenomenal success with his electric car when he enjoyed the luck of the “Golden Cross”. But is there greater success ahead? 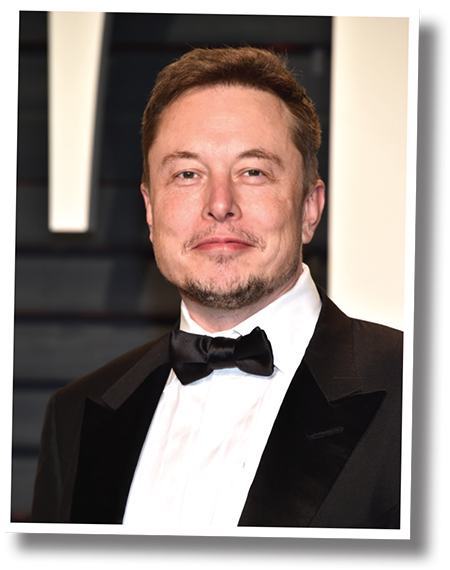 Elon Musk the CEO of Tesla Inc. and SpaceX is a modern day visionary who works at reducing global warming through sustainable energy production and consumption. His ideology of making better use of carbon-based resources as well as solar energy has made him very successful – and very rich.

Tesla became the only purely electric car when it mass produced the Roadster back in February 2008. Despite initial competition from other car manufacturers, Tesla has become the most successful electric powered car today. They won the award for bestselling plug-in electric car in 2015 and 2016. I decide to investigate the birth chart of Elon Musk to see if his success will continue, or if his innovative and futuristic ideas will die away or be developed by someone else. 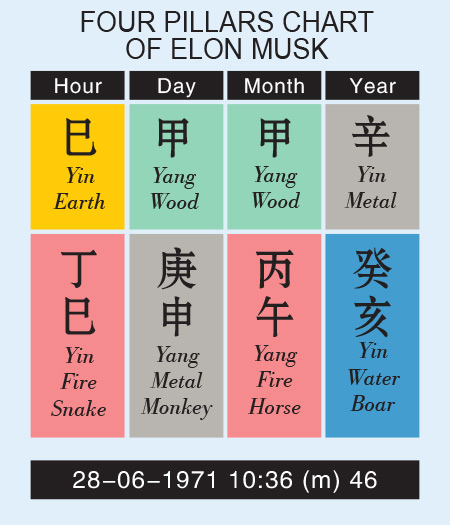 He has a balanced chart with all elements present. His self element is Weak Yang Wood and his favorable elements are wood and water. His Ten Year Luck Pillars do not appear spectacular until we reach his Luck Pillar indicating his luck from age 27 to 37 years. His chart also shows many hidden stars that are beneficial for him, in particular the good fortune star indicated by the Snake in his Hour Pillar.

Unfortunately, his Snake is in direct clash with his Boar, and when combined with the Monkey in his Day Pillar, it indicates challenges in his love life affecting marriage and family luck. It is no wonder that he has gone through three divorces – the first when he turned age 37, the second when he was 41, and the last divorce was last year in the Year of the Monkey.

In his chart, this happened in the luck pillar of 37, when the Tiger clashes directly with the Monkey in his Day Pillar. It is a good thing he had the Boar in his Year Pillar, otherwise the combination of Tiger, Snake and Monkey would have caused him to suffer from serious heart problems. As it is, the Boar being present also created the Four-Element Cross of the Paht Chee system! This is what brought him the enormous success that came during this period of his life.

Big career success came when the Tiger appeared in his luck pillar of 37 years.

Here the Tiger completes the four element cross of animals – Boar, Monkey, Snake and Tiger – which creates the golden 4 element cross that brings phenomenal success luck. Occurring within this luck pillar was when the Tesla Roadster was launched.

This was followed by continued good fortune when the SpaceX Dragon Vehicle became the first privately produced and funded space vehicle to dock at the International Space Station in 2012, as well as the following two models of the Tesla Model S and Model X. The question facing him is – will his success get bigger or is this it?

In the coming year 2018, being the year of the Earth Dog means that he moves to the next luck pillar of Double Earth Ox. We know that Earth is an unlucky element for him and with the Double Earth from the year 2018 coupled with the Double Earth from the luck pillar 47 means that there is an excess of Earth. Coupled with the loss of the Tiger’s influence, this is likely to lead to big financial losses for him. But note that the Ox in this luck pillar represents his Star of Money Bags. He also has the Prosperity Star as well as the Good Fortune Star, so here, the excess Earth influence is unlikely to bankrupt him, but it does indicate that he needs to endure some major business difficulties. 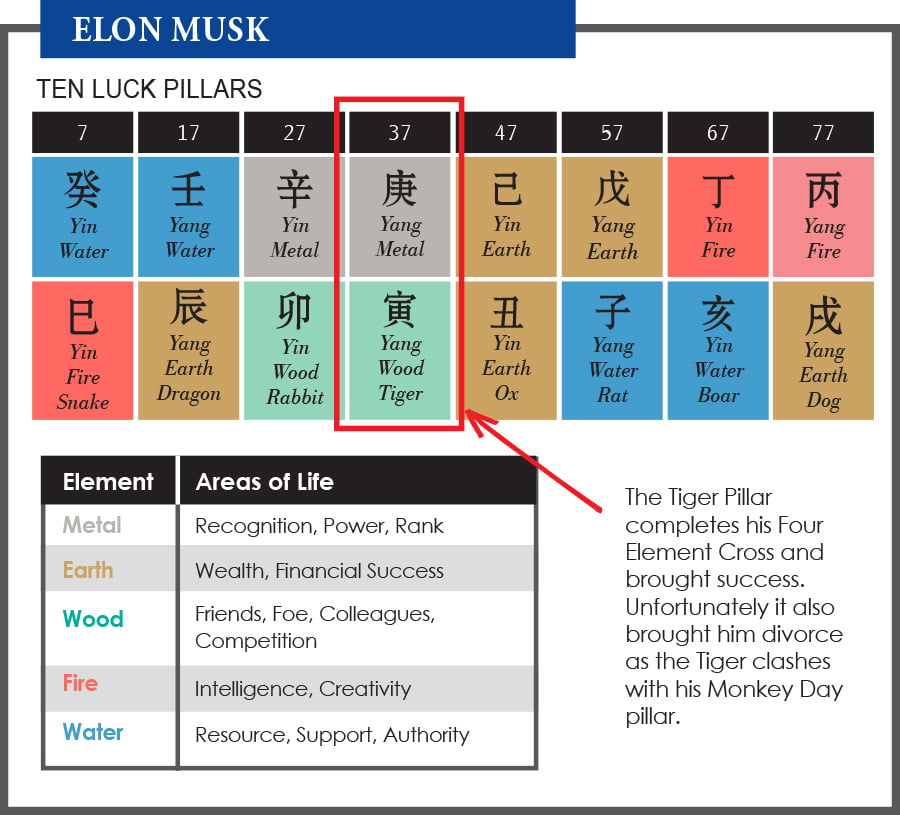 Looking forward into the future of Tesla, many financial analysts worry that with limited production resources and the low profit margins of the latest Model 3 launched in early 2017, Tesla might not be able to compete effectively in the global car market, unless they can penetrate the huge China market. This is unlikely to happen for Elon Musk, as he is a Boar, while Xi Jingping, the President of China, is a Snake. This suggests there is a clash of conflict animals. Elon Musk is unlikely to get much headway in China.

This does mean that Elon Musk is likely to fade into obscurity and retire a rich man, but if his electric car is to develop into a global phenomenon in the near future, it will likely be
due to other people taking it further along. 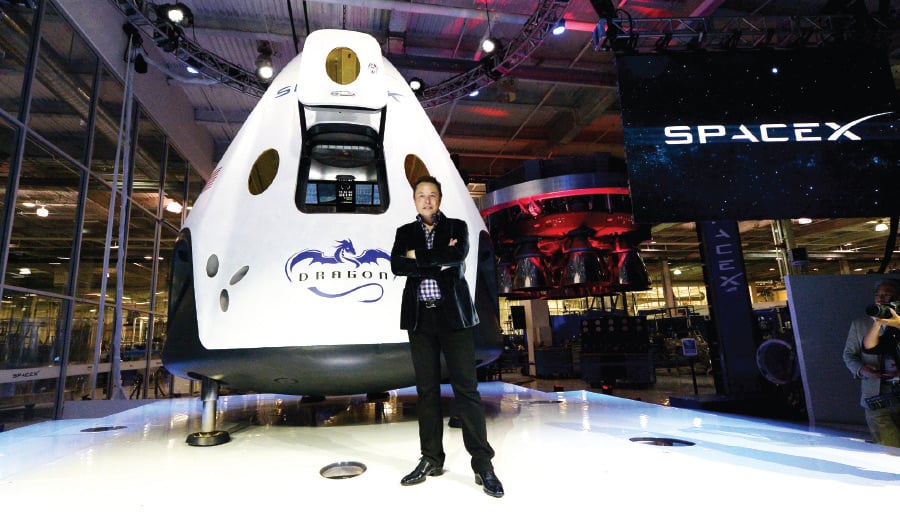 Selecting Materials & Finishes For Your Project

When A “STAR” Appears On Your Palm