Every so often, we all need some form of inspiration, especially when it comes to designing our own space. One of the things I like to do is to compile a “Design Diary”, where I bring together all the neat ideas I think I might like to implement into my design, things that strike me as clever or interesting, that I can file away for future use.

Here are some design tips that I have come across, which offer some fascinating concepts that I could find useful to implement at some point.

One of the great techniques to look at especially when it comes to the interiors of the home is to understand that the space is made of four specific areas: Flooring, Ceiling, Walls and Light. When it comes to light, it refers to not only the physical lighting of the space, but also the external views that create the negative element of the walls. 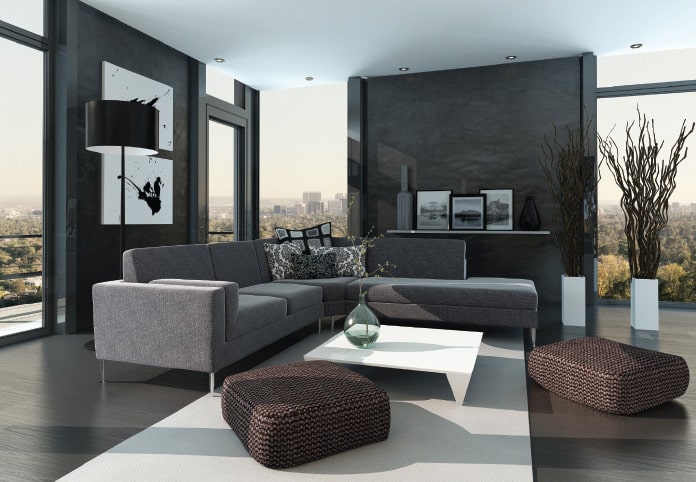 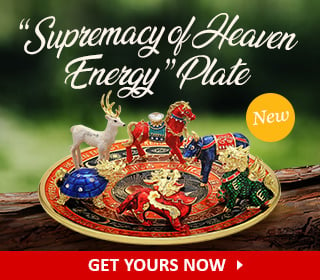 In this scenario, the walls are painted in a dark tone finish to create a yin-yang effect, whereby the wall generates an anchoring effect to the ceiling plane. The central white carpet also provides a balancing effect to the flooring plane, by centering with the middle of the feature wall. The more interesting element of the space is how the windows are allocated to give prominence to the walls, allowing each wall to become a feature on its own. By allowing full height windows at all corners and sides, it allows the windows to act as a negative wall effect; so rather than the walls acting as the backdrop to the windows, the windows now act like a backdrop, allowing each wall to become the centrepiece. 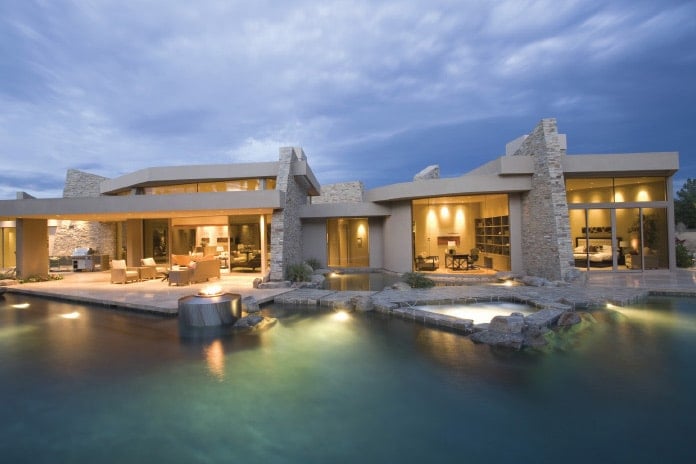 Another use of materials I find to be exciting, is to use materials as a form of space division. In this example, it shows a clear cut use of a stone finish as a separator, which may otherwise look like a feature wall. By slotting in the vertical wall elements into the building, it creates an interesting feature where the house is visually divided into three distinct sections from the public living area on the left, to the semi-private study area in the middle and the more private bedroom on the right. All these elements are then pulled together into a single architectural element through the pool, which spans the whole length of the house. So visually, while each space is segregated into its own section, they are effectively interconnected through a common element – the pool. 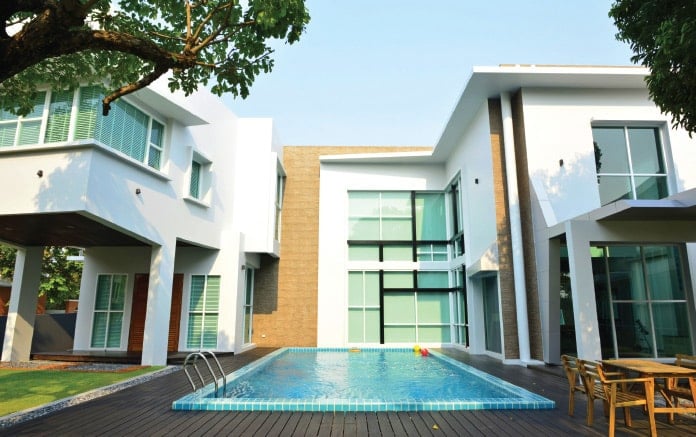 Sometimes there are design elements I try to decipher, then place at the back of my diary as things to avoid. In this example, while the house offers all the key characteristics of the three spatial zones, I find a few elements to take note of and walk away. First, the contrast between the central white and black window framing technique doesn’t offer much excitement apart from being different. Second, the balancing of the facades between the right cantilevered roof and the left cantilevered bedroom is unbalanced. By cantilevering the bedroom out by such a large extent, it creates an unbalanced and uneasy feeling. The façade would have worked better by mirroring the column support to get a symmetrical feel to the home, and also allowing the bedroom to not create this domineering feel to the space. 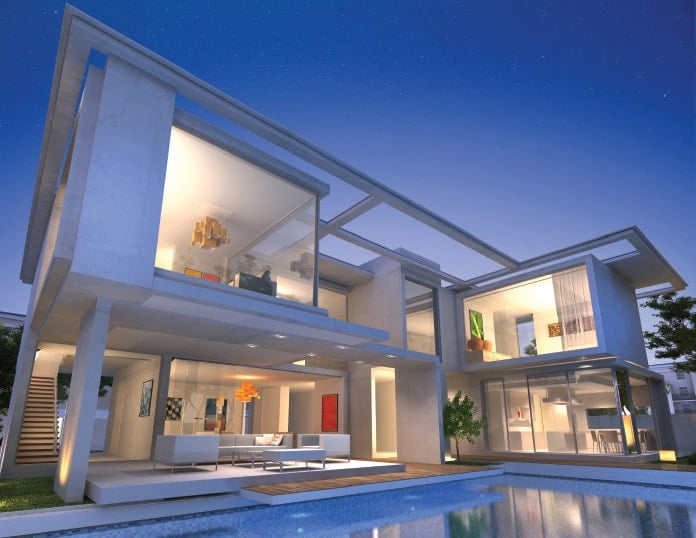 The next element I find to be quite intriguing is the use of the empty roof. In this scenario, I love the idea of the open plan design with the large windows to create a floating feel to the home. From the use of the spaces, to the forms and shapes of the home, balanced out with the pool; this all adds excitement when I see the home, but the one element I am still thinking about is the empty roof. 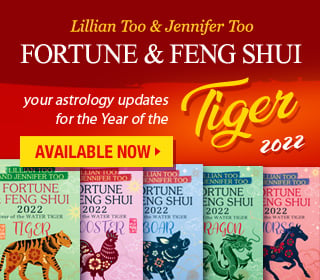 By creating a void within the roof, it adds and compliments the simple feel to the home, quite similar to complimenting how the large windows to the walls of the home. But I feel that somehow the idea was taken and implemented too much. I would have rather kept the negative element of the room as a feature to reflect the large windows at the front and maintain a flat roof for the remainder of the house.

Finally, my favourite concept to look at is framing. There are so many ways to frame a wall or feature in the house but in the core essence you are always framing a wall through the use of either positive or negative space.

And to design with the positive and negative element, the secret is to look at glass and what’s behind it as your base element. In this scenario, the landscape view behind acts as a backdrop to the house, so rather than limiting the confines of your house to just the interior, try to work with the surroundings.

Here are the two scenarios that could happen. The first is to introduce a glass wall or glass doors, which allows the user to view the external landscape. While this allows one to appreciate the view beyond, it somehow still feels as if there is no link between the interior and the exterior. 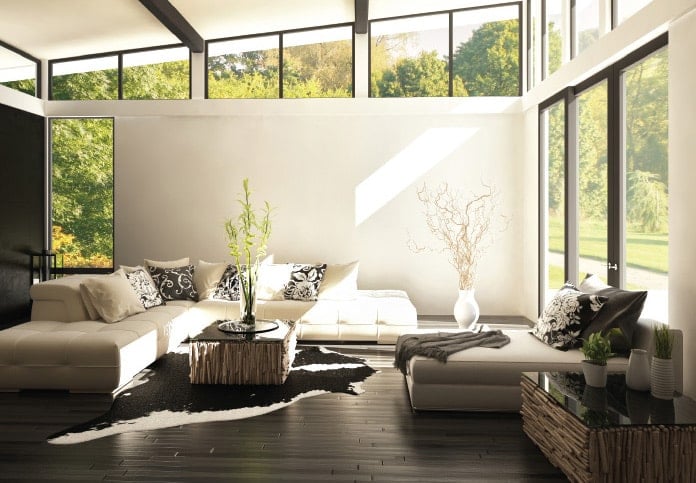 The second scenario is what I find exciting. By creating the negative element whereby the glass surrounds the physical wall, it allows the user to see and know there is a landscape element behind. Yet the wall creates this physical feature so the landscape then frames your feature wall, ‘pulling’ the landscape closer to you to create that physical link within the home.

The next time you look at design articles, photos and images, look beyond the pretty pictures and ask yourself how you feel, what you see and what is so striking about the image you like. From there you can pick certain elements you think are intriguing and see how it works out for you in your home. 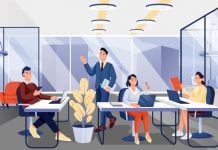 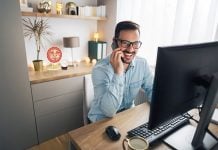 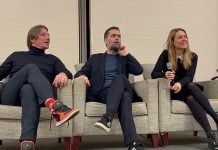 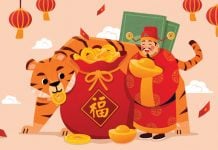 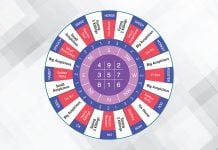 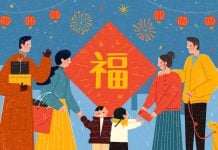