The NOSE is one of the six most important features on the face, the other five being the eyes, forehead, cheeks, mouth and jaw. Each of these features reveals our character, our success potential and many other interesting facts related to our destiny. Of the six features, it is the nose that is the best indication of whether or not there is money in your future.

Continuing our regular series on Chinese face reading, this issue we look at the center of the face to focus attention on the NOSE, generally regarded – and with good reason – as the best indication of wealth potential in the destiny of anyone. Conventional wisdom has it that the longer, larger and bigger the nose is in proportion to the size and shape of the face, the more prosperity is indicated. And depending on the proportions of the face, the timing of the blossoming of wealth can even be accurately gauged. But the nose is also an indication of the way a person loves and expresses love.

Here, LILLIAN TOO offers pointers on how to analyze the colour, shine, shape and appearance of the nose and also gives a reading on some…

The best examples of celebrities with prominent and famous noses can be found from amongst some of the most successful Showbiz personalities that have become legendary in the extent of the fame they have achieved and the wealth they have amassed. BARBRA STREISAND’s nose is her most prominent feature; it is large and long and it dominates her face. Her nose is the first thing you see no matter from what angle you are looking. If she had lived in a later era, she might well have opted for plastic surgery, as so many who came after her have been known to do (only to fade into oblivion after having their nose chiseled down to a sharp, pointed top!)

But Barbra parlayed her nose to be her defining facial feature. She wears her nose proudly even as she dazzles the world with her amazing voice and stunning performances. Who can forget her role in FUNNY GIRL for which she won an Oscar, or her hit songs, so many of which have become much beloved classics. For many in my generation, Barbra Streisand epitomized so many things. I was so inspired by her great role with Robert Redford in THE WAY WE WERE that until today, I still remember the song word for word, and hearing it, I get all weepy indulging in memories of my University days at Harvard… she evokes such nostalgia!

Writing this feature on noses, Barbra Streisand’s face comes instantly to mind. Look at the pictures and see how long and large her nose is. In fact, it really is even too large. In profile or from the front, the nose is a defining presence, and at the top directly between the eyes right until the bottom, her nose is placed very high, to an extent that it actually sets the eyes strikingly apart.

The length of her nose has just the tiniest suggestion of a broadening outwards to create a very noticeable enlargement at the base of the nose. Her nostrils are not small, but they are barely noticeable because they are well placed below the main part of the nose, as a result of which, from the front, the whole nose has a symmetrical appearance. This brings her luck in love and in her work.

Everything about Barbra Streisand’s nose is incredibly auspicious. Its prominent size and length brings her great wealth, but more than wealth, because her nose has such a wide surface area at the bridge, it also brings her fabulous acclaim and success. And because of the length, her success is long lasting and her wealth does not decrease, it only increases over time. She is in her Seventies now, and still commands top dollar for her concerts. And her albums have sold, and continue to sell, well over 200 million copies.

The nose is the principal gauge of wealth potential. The higher the bridge of the nose, the greater will be the success achieved. A high-bridged nose, especially from the top of the nose down is not only a sign of beauty; experts in face reading advise that such people have the destiny to rise to positions of great power and prominence.

That the bridge of her nose is so high also indicates that for her, success and the acquisition of wealth comes early. Barbra had her first big break at the age of 20 in 1962 and won her Oscar (for FUNNY GIRL) in 1968 when she was 26 years old. As a Hollywood star, her face benefits from the best make up, so her nose blended to blend into the rest of her face. It is always smooth with a bit of shine; these added to the manifestation of all the good fortune indicated in her nose! The nose is also indicative of how she loves – and we know she has been married to the same man, James Brolin, for almost 16 years. Her first marriage to Elliot Gould lasted eight years.

AS A INDICATOR OF WEALTH 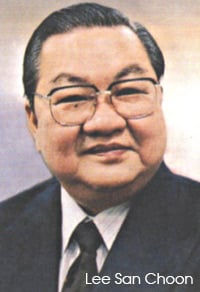 The Chinese have always looked kindly on people who have big noses and generally, the fleshier the nose, the richer the person will become. Here, wealth is indicated by the bottom of the nose. Many of the wealthy towkays possess noses like this and I remember during my corporate days when I was working for the Hong Leong group in Malaysia, I was quite mesmerized with one of Malaysia’s most successful politician. He was Lee San Choon, at that time the President of MCA (Malaysian Chinese Association). He has one of the largest, most fleshy noses I have ever seen. He was a frequent visitor to our corporate penthouse. I knew him well as he was very close to my boss, the head of the Hong Leong group. But Lee made his great wealth in palm oil, in industrial ventures and in property after he left politics very early in his political career.

I was not surprised he became such a successful businessman, as I always knew he was smart, plus his nose is truly big and fleshy!

Those with fleshy noses – the majority of whom tend to be male – are generous and sensitive to other peoples’ feelings. Although they will ultimately get very rich, their journey to great wealth is not easy. They will likely encounter betrayals and backstabbing before rising above the competition. Their early days will be one long battle against those who envy them. Such people usually allow others to take advantage of them, but in the end, their genuine good intentions reward them with a happy life. Their lives get better with age. But such men find it hard to articulate their feelings, so they are rarely if ever very successful with the opposite sex. And usually, in the end, such men transfer all their energy into their work and give up on love pretty much.

Women with fleshy noses tend to be more successful in their work life than in their love life, UNLESS they find a partner during their early years. Otherwise, they tend to place greater importance on their careers. Such women then tend to amass their own wealth. Unfortunately, this causes them to be less and less forthcoming about letting people into their lives. Which is sad.

The nose is the principal gauge of wealth potential, and the higher the bridge of the nose, the greater will be the success achieved. A high-bridged nose, especially from the top of the nose down, is not only a sign of beauty; experts in face reading advise that such people have the destiny to rise to positions of great power and prominence. They will enjoy high social status in life. You can see from Lee San Choon’s face, for example, that he does not have a high bridge, hence his political career was short-lived, even though he made it to the very top.

On the downside, note that auspicious noses, especially those whose noses are long and high-bridged, also indicate extremely snobbish tendencies. People whose noses are straight and high tend to look down on the less well-endowed people in their life. Maybe this was why the phrase “looking down your nose at others” was coined. Men with this kind of nose generally tend to look down on their wives, no matter how well-connected or how beautiful they may be. The narrower the nose, the greater the degree of snobbery exhibited. Such men (and women) demand extremely high standards from their partners and will not hesitate to look elsewhere should their wives disappoint them, or should they not live up to their expectations.

Women with such noses, especially those with nose tips that are pointed and high, are vain and tend to be self-centered. They are very conscious of their appearance and how they come across to others. And social status is highly important to them.

Those with a straight nose and a straight tip are clever and have the ability to make plenty of money through their work; such people – men or women – are smart and very ambitious and they usually make it to the top of their professions.

Finally, I want to say that, if possible, do try not to “cut” any part of the nose, and especially, do not try to make it slim and pointed when you are born with a well-endowed nose. Just look at Michael Jackson who was born with such an auspicious nose but who squandered all his great good fortune by making his nose thinner and thinner until it almost collapsed! In his later years, he was found in the sad position of having to repair his much tarnished reputation and his wealth; and unfortunately, everything ended sadly.

Flat-Nosed people should try to be more positive as you tend to have a pessimistic attitude. Negative expectations never benefitted anyone. It is a good idea to use cosmetics to create an illusion of a high nose, as this will make your life more auspicious. But do not use cosmetic surgery.

Aquiline-Nosed people have outstanding planning and tactical skills. They tend to be excessively money-oriented and business-minded. Not the sort to cross. This nose is usually associated with those with no compassionate tendencies. Such people can be hard-hearted, and others too view them with wariness.

Short-Nosed people tend to lack in self confidence and also tend to feel envious of others. They prefer not to be in the limelight and seldom express their true opinions, even when specifically called on to do so. They do not open up easily to others, and it takes a long time for trust to develop even with those close to them.

High-Nosed people are creative and can be very artistic. Such people tend to be snobbish. They can be foolishly optimistic and their reality can be different from the true situation. But this is a nose that does indicate good fortune. There is the luck of acclaim and early success.

Crooked-Nosed people can be manipulative and impatient, but it is also an indication of great warmth and tenderness. Such people tend to be slow in developing relationships, but are exceedingly loyal to those they give their hearts to.

FLYING STARS VS HUNGRY GHOSTS… Dealing with the TIME dimension...

Feng Shui For The Bedroom