If ever you find yourself in an airplane that is about to commence landing towards Singapore Airport, peek out the window. You might be able to catch a glimpse of a triangle-shaped island that lies just beneath the coast of Johor. A few years ago, this location was nothing but sea water. Today, it has become PHASE ONE of China’s largest and most ambitious city project outside Chinese soil. 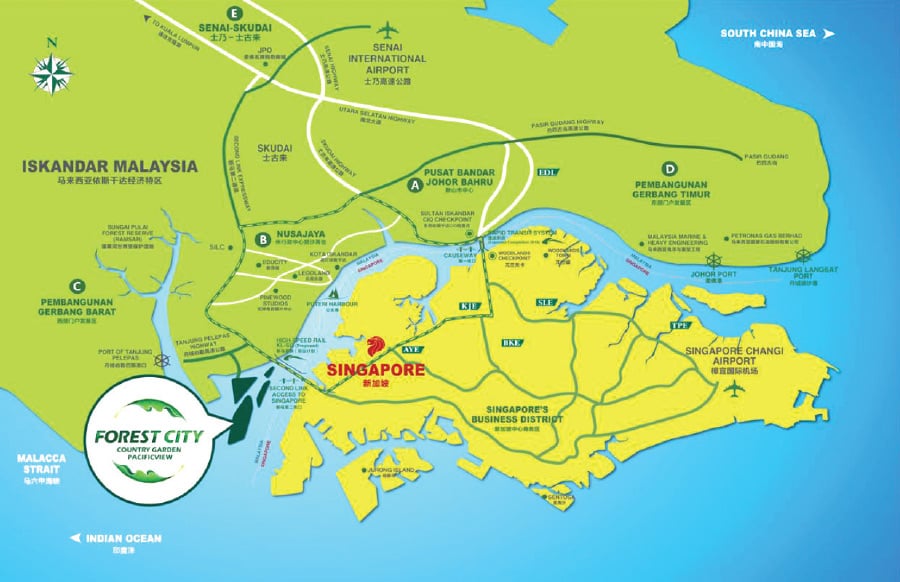 This fire-element piece of reclaimed land is the first of four islands that will make up FOREST CITY, a futuristic group of eco-urban-islands that will eventually house 700 million global citizens who dream of living and working in a “perfect city”. The future “citizens” of this new city will enjoy pristine beaches with clear water and breathe fresh-clean air unpolluted by vehicle or industrial emissions. From landscaped lawns and manicured golf courses to flowering shrubs on the face of each building, luscious greenery will blend seamlessly with the towering skyscrapers everywhere within view.

Thousands of high-tech, modern residential housing that caters to middle class and upper-income society will be made available for purchase. And the city itself will bring in world class entertainment, have international restaurants as well as top education and medical facilities. It’s paradise with a modern twist and the Chinese are going to spend A TON of money to make this a reality!

Chinese developer Country Garden Holdings Co. has already partnered with hundreds of Malaysian and foreign entities to invest more than US$100 billion in building the world’s most modern “smart cities”.

Why are the Chinese placing such high hopes and cash into Malaysia?

“The Chinese developers see this as an opportunity. A lot of them say Iskandar is just like Shenzhen was 10 years ago,” said Jonathan Lo, manager of valuations at CH Williams Talhar & Wong, a property broker based in Johor Bahru.

Though located close to Singapore, its geographical jurisdiction falls within MALAYSIA’s Iskandar City; so that all businesses conducted within Forest City will enjoy all of Iskandar city’s financial incentives such as tariff exemptions and other perks. Foreigners who wish to stay in Forest City are eligible to apply and take advantage of Malaysia’s “My Second Home Program” which offers a 10-year working visa and attractive tax incentives for expatriates who qualify.

The project is expected to complete in 20 years, with all four reclaimed islands spanning 2,025ha off the coast of Gelang Patah, Johor. A quick search on Google Maps and its satellite images reveal that half of the first island is already completed with land infrastructure linking mainland Iskandar City (in Johor) to the island.

WHO WILL LIVE IN FOREST CITY?

One may well ask the question, “who will eventually live in this city?”

China has a recent history of building a slew of megacities in their homeland and many of them are “ghost towns” – huge empty malls with strips of condominiums and houses that are owned by Chinese investors, but not a single person lives within.

According to an article published by Bloomberg News in November last year, the number of residential properties Forest City have already outstripped demand, that in order to sell these hundreds of new units built every month, some developers have taken to flying in planeloads of potential buyers from China. This was what prompted low-cost airline AirAsia to initiate direct flights connecting Johor Bahru with Guangzhou in May last year!

The project is expected to complete in 20 years, with all four reclaimed islands spanning 2,025ha off the coast of Gelang Patah, Johor.

And this marketing initiative seems to have worked very well for the Chinese; each flight brings about 100 to 150 potential Chinese buyers whose trip to Forest City are subsidized by Country Garden themselves. Almost half of the groups who come end up buying a residence, although it’s not clear if they will ever live here. Also, Country Garden has run into a hiccup, as the Chinese Government has recently tightened controls in efforts to curtail Chinese investment in properties overseas.

Nevertheless, Country Garden Pacific View Sdn Bhd (Country Garden’s local representative here in Malaysia)’s Executive Director Datuk Md Othman Yusof has assured the public that the project is right on track and will continue to gain momentum with the start of Stage Two of its Industrialised Building Systems facility.

“Despite challenges faced by Forest City, we are moving in a very positive manner. Whatever negative stories that were supposedly associated with Forest City are untrue as we have continued to develop the project according to the scheduled timeline we had laid out,” Othman told NST Business in an interview on August 3rd, 2017.

The island is already showing some initial signs of economic activity. Forest City’s first five-star hotel – Phoenix Hotel – opened for business in October last year. News reports indicate that over 80% of its residential properties have already been sold. A health centre as well as a private American boarding school – Shattuck-St Mary’s – will open its doors to new students starting August 2018.

Phase 2 development is targeted to launch end of next year with RM 1.2 billion already invested in building several 18-hole golf courses and also a five-star hotel. The vision is for high-income earners from around the globe to come and make Forest City their first or second home here in Southeast Asia.

CHINA’S “ONE BELT ONE ROAD” INITIATIVE: BUILDING A PAIR OF EARTH AND WATER DRAGONS

In addition to the economic benefits that Forest City can generate for Singapore and Malaysia, the more exciting aspect of Forest City is how it fits into a Master plan that was unveiled by the Chinese back in 2013. China is working hard to resurrect two very ancient sleeping DRAGONS that once prospered and gave rise to the Chinese Empire: an Earth Dragon (Silk Road) and a Sea Dragon (Silk Route).

Forest City is a joint venture project between China and Malaysia and is expected to become the glowing prototype for a long list of infrastructure projects that will be built as part of China’s ambitious “One Belt One Road Initiative” that is proposed by President Xi Jin Ping.

For those who may not be aware of this grand plan, the One Belt One Road (OBOR), (recently renamed as “Belt and Road Initiative”) is China’s game-changing economic strategy to link Asian and European nations to China via land (Silk Road Economic Belt) and maritime routes (Maritime Silk Road).

OBOR builds on China’s original Silk Road (by road) and Silk Route (by sea) and is targeted at investing in massive infrastructure projects and development of “economic corridors” in strategic locations. The Maritime Silk Road will run from the Chinese Coast through Singapore, then on to the Mediterranean. Geographically, the Road routes will be structured along six major “corridors” as follows:

The “Road” initiative will comprise building railroads, highways and bridges and can be divided into two main parts: the Asian Belt, and the European Belt.

The Asian Belt will connect Singapore all the way to Kunmin, China via rail and roads. A route from Kolkata (India) to Kunmin is also planned. Once established, a person living in China will be able to take a high-speed train that goes all the way down to Singapore, via Myanmar, Thailand and Malaysia all within two to three days. Similarly, citizens from these countries will be able to travel all the way to China by land or rail.

The European Belt will connect Beijing all the way to Russia and cities in Europe. In theory travellers will be able to take a train or drive from Beijing to Istanbul, Moscow and onto Venice.

The initiative is already under-way at record Chinese speed, and 60 countries have already entered into trade talks, deals and infrastructure negotiations with China to deliver on this great plan. Many of them are as excited as China to unlock economic opportunities that were previously not viable due to geographic constraints. You can imagine the enormous trade and economic boost that it will do for all the countries that will participate in this venture. The cumulative investment needed to fund this whole project is estimated to be around US$4 trillion to US$8 trillion but this is just based on the projects that have already been identified and begun!

China, on the other hand, have invested billions of dollars in several South Asian countries like Pakistan, Nepal, Sri Lanka, Bangladesh, and Afghanistan, which show marked improvements in their basic infrastructure and contributed to their economic growth.

China’s grand vision has attracted criticism and controversy from factions allied to US interests, claiming that the motivation behind China’s big plan is to gain political (and likely, military control) in Asia rather than developing trade and economic opportunities within the region.

But many in favour of China’s vision have pointed out that while the US may have committed itself to funding the development of poor and under-developed nations based on humanitarian grounds in the past, they have yet to produce any real success stories or follow through on their many and extensive promises of progress.

China, on the other hand, have invested billions of dollars in several South Asian countries like Pakistan, Nepal, Sri Lanka, Bangladesh, and Afghanistan, which show marked improvements in their basic infrastructure and contributed to their economic growth.

Forest City Johor is China’s flagship project in this Southeast ASIA part of the world, and most are optimistic that the Chinese will surely pour the right amount of resources into making it a grand success! Anyone currently living anywhere else wishing to live in this part of the world, our advice is to buy a property there now before it gets simply too expensive!