On Monday 21st August, just one day before the start of Hungry Ghost Month, our Sun was eclipsed completely by the moon. Millions of people in the United States looked up to the skies to witness this event. A few days later, Hurricane Harvey began pummelling the Gulf of Texas, as fires broke out across Northwest America. Two weeks later, Hurricane Irma began storming from the Cape Verde Islands, moving quickly from a Category 2 storm to Category 3. By Sept 4th Irma is reclassified as a catastrophic Category 5 hurricane (like Hurricane Katrina) and unleashes havoc over the Caribbean islands and heads towards Florida from the Southeast.

Here in Malaysia, we were following the news closely with some level of anxiety; the danger became very real for us, as some of our students living in Florida and surrounding states were actively sending us Whatsapp messages to request for strong prayers.

Lilian Warman, our student who lives in Tampa, messaged us for powerful mantras she could chant. Carolina and Mauricio who live in Miami, were sending us live updates every hour on the situation on ground. Photos of the frightening flood waters that rose 6 to 10 feet above ground… and their desperate plight to get a flight out of Florida as soon as possible!

The government of Florida had already issued a state-wide evacuation warning, and people across the coastal areas were frantically trying to get away amidst warnings via Facebook, corporate email and Whatsapp chat groups.

Carolina and Mauricio were on the waiting list to get onto any flight that got them out of Florida… but all the flights were booked and the airport was on lock-down. Massive prayers were dedicated to all our students’ safety, and finally, they were able to get on a plane. Even while seated inside the plane, it took hours before they were cleared for take-off and even then, after the plane flew off the runway, they were asked to turn back!

Carolina and Mauricio eventually made it safely out of Florida, but many were not as lucky. The storm brought flood levels up to 6-10 feet above ground, submerging cars and trains, rendering ground transport completely impossible. Thousands of houses, buildings, vehicles and highway infrastructure were destroyed, and not only in the United States. Hurricane Irma had caused major damage in Barbuda, Saint Barthélemy, Saint Martin, Anguilla and the Virgin Islands. As of September 15, Irma had taken the lives of 82 people – 43 in the Caribbean and 39 in the United States.

While Irma was pummelling the coasts of Florida, Hurricane Harvey was wreaking destruction in the coast of Texas Gulf Coast as a Category 4 storm (the strongest storm to hit a U.S. coast since Hurricane Wilma in 2005).

Ancient texts have warned us about the dangers of Solar and Lunar eclipses as inauspicious omens. Sadly, one of the side effects of modern society is that many of us choose to ignore warnings from old traditions, dismissing them as mere superstition.

In August, millions of Americans looked to the skies to glorify the terrible moment where the Sun, which is the energy source of all life, was momentarily overshadowed by the Moon; some even threw BBQ parties and celebrated the disappearance of the Sun as if it was an event for rejoicing!

Throughout history, astronomers and astrologers have noted destructive events that follow after a full solar eclipse that occur visibly over the skies of civilisation. The earliest example of this connection goes back to clay tablets found in Mesopotamia between 2300 and 1800 B.C. According to these tablets, if there was a solar eclipse, the king of the country would die. To avert such a terrible fate, for 100 days, the king would temporarily abdicate and live in the palace as “a peasant farmer”, while a condemned criminal would be plucked out the dungeons and dressed up as the “fake” king. Within that 100 days, the imposter would be assassinated to fulfil the prophecy of the eclipse and “trick” the Gods. “The peasant farmer” would then resume his rightful place on the throne, and all would be well again.

Ancient rulers really believed that the royal line or leadership of the country was under threat following a solar eclipse. Charlemagne’s son, Emperor Louis the Pious, died following an eclipse on May 5, 840. A solar eclipse on Jan. 27, 632, coincided with the death of the Prophet Mohammad’s son Ibrahim. In England, King Henry I died shortly after an eclipse that darkened the lands on Aug. 2, 1133.

In Asian and Nordic folklore, an eclipse is regarded as “the devouring of the sun”. The Vietnamese believe the sun to be eaten by a giant mythical frog, Norse culture blames it on a big bad wolf, while Hindu mythology says the Sun is swallowed by Rahu. In ancient China, prayer ceremonies would be held during the Eclipse and people would bang their pots and drums loudly while shouting to “scare off” the evil Dragon that came to “eat the sun”.

From a spiritual perspective, almost all traditions based on ancient wisdoms agree that a solar eclipse is considered a very dangerous time, as it is a momentary opportunity for demons of the underworld to rise above land during the daytime when Earth cannot benefit from the protective rays of both the Sun and Moon.

Remember – during an eclipse, not only the Sun’s rays are prevented from reaching the earth, but the Moon’s light (which is a reflection of the Sun’s light) is also obscured because it is placed directly in between the Sun and Earth. Hence the Sun and Moon – two of celestial bodies that give energy to the natural order of things and considered to be powerful protectors of our world – are blocked from us during a solar eclipse. This is the reason why Solar Eclipses are days when spiritual activities are multiplied 100 million times, while Lunar Eclipses provide a lesser multiplication of 7 million times.

Solar Eclipses also have multiplied karmic results because it occurs on the 30th day of Lunar Calendars; a day which is considered the darkest night of the month because there is NO MOON. This year, the 21st August was also the eve of the start of Hungry Ghost Month, where the gates of the hell are thrown open, allowing millions of spirits and lost souls to roam freely on Earth. What disastrous timing, an astrologer would say!

If we look at the trajectory of the Solar eclipse on the 21st August, you can see it enters U.S. skies from the SOUTHEAST, passes entirely over the United States to exit through the NORTHWEST. This trajectory is eerily similar to the pathways of both hurricanes Irma and Harvey, and lands on all the areas affected by natural disasters during August and September. While the Southeast of the US is devastated by excess of water, the Northwest (in the opposite location of the compass) is suffering from the lack of it!

August marked an unusually hot and dry spell for Northwest America, which ignited dozens of forest fires. Wild fires were reported in the states of MONTANA, OREGON and IDAHO, sending massive clouds of smoke across surrounding states of Washington, Wyoming and Nevada.

The Oregon fire was sparked as a result of a lightning strike, which spread over 5,830 acres of forest land due to strong wind conditions. In Idaho, 12 separate fires suddenly broke out in the Payette National Forest, and the total acreage covered by these fires is 31,036 acres.

When we had a look at the monthly Flying Star charts, we could see a correlation between the areas affected and the disharmony of elements there. 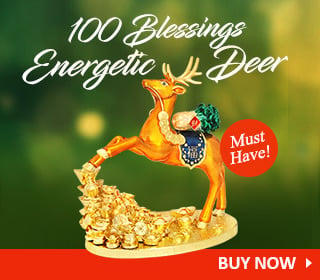 The August monthly feng shui chart (8th Aug – 7th Sept) shows that the Southeast has a clash of elements between fire and water. Here, the water element flies into the chart via the Southeast, bringing water that creates destructive energies with the annual 9 located there. Meanwhile, the Northwest which has the annual 2 (which is already an afflicted star) is made worse when the monthly #3 star flies into the sector. Here we have wood (#3) flying into earth (#2) forming a destructive relationship between the elements. 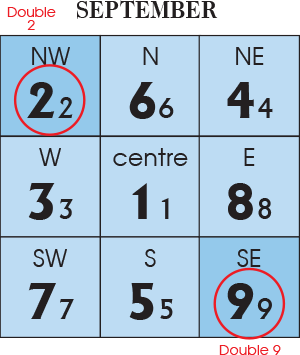 The September chart (8th Sept – 7th Oct) does not show much improvement as everything gets doubled. The Southeast gets the double 9; although this is a positive star, fire in the Southeast weakens this sector, which is primarily a wood sector. Meanwhile, the Northwest continues to suffer from the doubling of #2 illness star…

If the ancient solar eclipse prophecies are worth any salt, then September will be a very dangerous month for Donald Trump for sure. Donald is born in the year of the DOG, and the Double #2 can cause him grave illness unless he is wears strong amulet protection.

The good news is that IF you who have already seen the Eclipse and wish to dispel the bad luck from having seen it, you may chant two prayers. One is the Verses to the Eight Noble Ones 108 times (Chant a Mantra 4th Edition – page 196) and the other is the Kunzang Monlam prayer (which will be available in the 5th edition of Chant a Mantra coming out soon).

It is also a very good idea that we collectively dedicate prayers to help calm the storms and avert more disasters. One of the most powerful mantras for this is the Heart Essence Mantra of Vairochana (Chant a Mantra Book page 52). This mantra has the power to change the direction of fires and storms that are coming your way.

There is also a very powerful supplication to Guru Rinpoche that is extracted from the Sampa Lhundrupma (the new editions of Chant a Mantra will have this). Repeat this prayer as many times as you can when natural disasters such as this hit.

gyulü nyen ching jikpé dü jung tsé
To threaten these illusory bodies of ours with destruction,

yinyi tetsom mepar solwa deb
With no trace of doubt or hesitation we pray:

orgyen pemajungné-la solwa deb
To the Lotus-born Guru of Orgyen, we pray!

sampa lhüngyi drubpar jingyi lob
Grant your blessing, so all our wishes be spontaneously fulfilled!

Climbing The Snowcapped Mountains Of The Himalayas